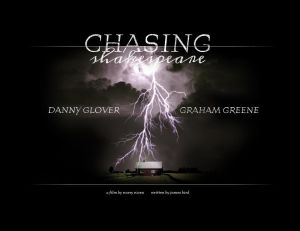 April 15, 2013 Off By SoulandSalsa
Chasing Shakespeare by Laurance Waters 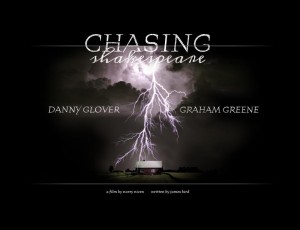 Danny Glover has proven, once again, why he is considered one of the best actors of this, or any, generation with a stellar performance in Chasing Shakespeare.  Glover stars as William Ward - man entering his twilight years with his Native American wife Venus, who has a passion for all things Shakespeare. At first glance, the pair appears to be immune to the scorn and crude comments inflicted on them by callous others.  As a distraction from the relentless jeers, Venus shares stories of  her tribe - the mystical Lightning People - and their connection to the Spirit World. However, things become increasingly strained between Ward and his young son (played by Dallas native Clarence Gilyard Jr. of television's Walker Texas Ranger fame) keep tensions smoldering just below the surface. First time director Norry Niven, also a Dallas native, makes his feature debut with a love story worthy of the film's namesake.  The film was featured as part of the "Community Showcase" at the 2013 Dallas International Film Festival - April 4-14th.  Also starring Ashley Bell, Tantoo Cardinal, Graham Greene, Chelsea Ricketts, and Mike Wade (116 mins.)
CategoryFILM
TagsAshley Bell Chelsea Ricketts Clarence Gilyard Jr Danny Glover DIFF Graham Greene Norry Niven