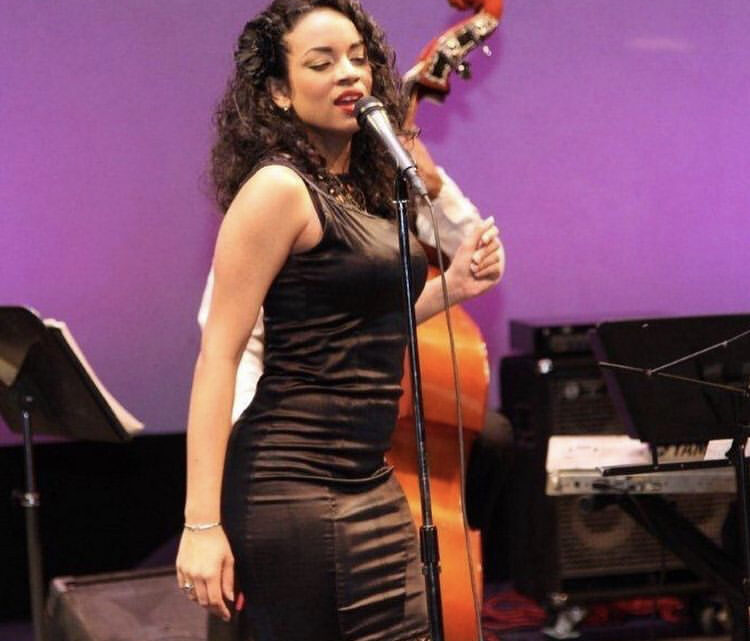 Emerald Khan is a true gem. She is living proof that you can overcome any hurdle with passion, resilience, and a great support system, including a pandemic and a near-fatal accident. Emerald is a force to be reckoned with, juggling an independent singing career, a full-time job in Corporate America, and single motherhood. But don’t be fooled by the tragic backstory; she doesn’t let hard times get her down, choosing instead to laugh in the face of adversity. “I gotta laugh about it.” The sultry Caribbean beauty hails from the U.S.V.I. and has come a long way since her first appearance in our 2012 issue, including landing a leading role in the feature film “Metronome” directed by Kimberly Skyrme. “I’m just super grateful to be a part of this. Playing the female lead and telling a story that is highly moving. Think about the vibe that we have as ‘Mo Better Blues’’ mixed with ‘Idlewild.’ ” When she’s not conquering new art mediums, Emerald can be found blessing Texas with her New Jazz sound, frequenting local venues in the Dallas and Fort Worth area ( Buttons, The Balcony Club, and Buzzbrews, to name a few). She covers songs with a voice that would make her idol Ella Fitzgerald proud, including a unique mix of her single “Nirvana’s Paradise” and Sade’s “Smooth Operator.” And although Dallas is her home, she is animate that she will perform wherever her talent takes her. “Honey, wherever they let me sing, and they’re enjoying the vibe that I’m bringing, I’m there.” Like the jazz juggernauts before her, Emerald Khan knows the value of a supreme band; she has shared the stage with legendary acts like Bobby Sparks, The Roots, Stone Mecca, and Linny Nance.

Recently, the Hollywood-glam songbird caught up with Soul and Salsa to chat about her future plans, how her life was impacted by the pandemic, and the steps she’s taking to be the “master of energy” out in Dallas.

SoulandSalsa-Where do you draw your inspiration from?

E.K.– Life. Yeah, my life. It’s just like acting, where I pull emotion and feelings. A lot of my songs are written by a variety of personal experiences. One of my favorites is called “Nirvana’s Paradise”. It was my letter to this guy that I was talking to. Yeah, sometimes music has the words that we don’t, you know? But that’s where I draw my inspiration for my music, through those emotions. Those feelings, the stories of memories, those experiences good or bad ugly and different.

SoulandSalsa: Your bio mentions that you have experience, not just in national entertainment but local entertainment, as well. What can you tell me about the underground jazz scene? Where’d you get your start?

E.K.– I started in D.C., and that’s why I always go back there. Played at the White House Correspondents Dinner, played at MSNBC’S event, I played in a lot of amazing functions and unforgettable experiences out in the DMV. It was a place where I toured for a good long time, that was my home. That’s where I graduated from Duke Ellington. My first gig was at the Bohemian Cavern, where I got my first check for getting up on the stage. It’s where I started my career. D.C. was my other home just like Dallas is now. That’s my local scene. I play in Buttons, The Balcony Club, Buzzbrews with Jah-Born. I’ve played with some amazing [artists] Bobby Sparks, Shaun Martin, Stone Mecca, Linny Nance, Liz Mikel, Jason Davis, Mahogany. In Dallas, these are some amazing players and artists so playing with them out here has been absolutely amazing. I’ve enjoyed every moment. Every venue from down in Fort Worth to Austin. Honey, I’m out there.

Read the full interview in Soul and Salsa Magazine