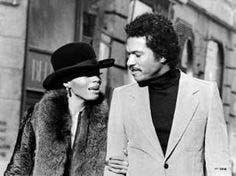 November 22, 2020 Off By SoulandSalsa
A Love Affair between Fashion and Film By N’Zuri Za Austin If you love movies, then you undoubtedly have taken notice of what the actors and actresses get to wear on screen. From fashion icons such as Audrey Hepburn in Breakfast at Tiffany’s; Diana Ross in Lady Sings the Blues and Mahogany; and Marie-France Pisier in Chanel Solitaire - fashion and film had a love affair that was truly in the air… and people were beginning to catch the bug.

With top-tier fashion magazines and cameras capturing red carpet appearances - the relationship between fashion and film began to manipulate the minds of viewers everywhere. High-Class designs became the most sought after commodity, and along with it came high class behavior. But somewhere over the years, the line between fashion and film became thin, and well, fashion in film pretty much became non-existent. Kim Wilcott Harris, the Editor at Large of Soul and Salsa, to discuss her views on the new era of fashion and film, and whether they have a future together. Kim - thank you for taking the time to talk with me. It’s my pleasure. It’s not often that I get to be interviewed. Usually I’m the one doing the interviewing, so this should be fun. And interesting. Oh, I’m sure it will be. So tell me a little bit about yourself. Well I graduated from the University of Texas at Arlington with a degree in Communications and a minor in business. I’ve worked in the publishing industry for over 12 years with my first job being at the Caprock Sun Entertainment Guide. I’m the host of the Kimie Simone Show at fbrn.us; the Editor at Large of Soul and Salsa Magazine, and I’m a staunch supporter of Film Festivals; especially the  Dallas International Film Festival and Women in Film Dallas - Chick Flicks, among a few other things. So you stay pretty busy? I have to. In this industry you have to stay involved and up-to-date with what’s going on in the community and in the world. I’m always networking, volunteering, and looking for new ways to improve myself, my business, and my community. Okay, so you said you are a supporter of DIFF and WIFD – Which means you love film. When did you fall in love with movies? Let me see… I fell in love with movies at the age of 5 when I went on my very first date. Mind you, it was only a daddy daughter date, but to a 5 year old girl it was everything. Anyway, my dad took me to see ET and Annie and although I really loved both of them, Annie was my favorite. I was so fascinated with the acting and singing and dancing and mischief - I wanted to be up there on the big screen. I wanted to be Annie. Do you act now? No. But I did memorize all of the songs to Annie and perform them as a kid for my family and friends. Oh and I’ve filled in as an extra on a few films. It was a fun experience. Anything I’ve heard of? You couldn’t blink, but I was in Any Given Sunday –  written by Daniel Pyne, directed by Oliver Stone; A Heart that Forgives – written by Ken Jenkins, directed by M. Legend Brown; and worked on Hidden Ties, directed by London Williams. So what’s your favorite era in the movies? I love older movies. The classics like Coco before Channel, Mahogany, and Mommie Dearest. You know the kind where the women wore classy dresses and gloves, and scarves, and pillbox hats. And the men were gentlemen and charming and chivalrous and knew how to romance a lady. So you’re a romantic? I am! I love all things romance. I love the poems; the music; the candlelight dinners; the walks in the park; the atmosphere; the long conversations. I love, love. You sound so whimsical when you say it. So who is your movie crush couple from that era? And who is your movie crush now? Do I? I guess it’s kind of hard not to be when you grow up watching the dynamics between Billy Dee and Diana Ross. They were my movie crush from that era. I always thought Billy Dee had so much swag and I was intrigued by him.

And now? Idris Elba is definitely my new crush! He radiates the manly man that is strong and straightforward – yet charming and sexy. He unquestionably displays that old Hollywood swag I like. As far as a Hollywood couple, I think we missed the mark on that one. I thought Tom Cruise and Renee Zellweiger could have been the new Hollywood film couple from when they were in Jerry McGuire, but they never did another movie together. I also loved Boomerang as well with Eddie Murphy, Halle Berry and Robin Givens. I always thought that their relationship could have spun off a new movie. Which movie and scene from either was your favorite? Hmmmmm… I don’t believe there is an actual scene that I loved the most from Billy Dee and Diana Ross. It was more of a feeling they planted in me. It made me feel like… like Billie Dee really was in love with Diana, and that he would do anything for her and that made me smile. Now in Boomerang, I think when Eddie Murphy told Halle Berry that he couldn’t breathe without her... that was one of my most favorite moments in the movie. If there was a certain actress’s designs you could borrow and dress up in; which one would it be? I would say Elizabeth Taylor designs. She always had the jewels, and the dresses that accentuated her assets and she had this certain charm that I always adored. So you’re an admirer of the Old Hollywood Glam as well? Oh yes! I admire everything about Old Hollywood Glamour. It focused on enhancing the everyday woman’s features and highlighting our individuality. Nowadays everyone just seems to be a carbon copy of something or someone. Why do you think that is? What changed? I think what changed is the character of a woman. Back in the day a woman was classified as sexy by the way she carried herself. She had charisma and poise. But then something happened. Women began to lose themselves – their sense of worth – their clothing. They started taking roles that required, at first semi-nudity and then full nudity. Unfortunately it carried over into fashion as well. But not with men though? Not with men. The ratio of female nudity definitely outweighs male nudity. Of course there are a few men I wouldn’t mind seeing in the nude. Oh I’m sure there are many, many who would agree.  So why do you think men kept it “classy” but women didn’t. I think the whole sex sells is what did it. Women became an item to be put on display in the name of art. And of course women don’t mind looking at another woman’s body. But men do mind looking at other men. And then of course there’s also the matter of the fragile male ego. So the world became over-saturated by the naked female body. And it’s not just in film and fashion – I see it everywhere I look. It’s on TV, Billboards, the internet, social media. So naturally aspiring actresses and models feel like the more skin they show, the more relevant they will become. Well you know they say history repeats itself - do you think classic wear will ever come back? I think more men are wearing suits and bowties now, and are more likely to embrace the custom gentlemen fashion. For women, I don’t see elegance coming back for a while. Okay so we talked about what made you fall in love with movies, now I’d like to know what has kept that love going. I know it’s probably cliché to say that I was born to love film, but honestly I was. I will always love film and what it represents. And what does it represent for you? Hope. It represents hope. You know… can these characters really exist in real life? Can there really be a “happily ever after”? A Knight in Shining armor? Can I have my Cinderella moment or My Sleepless in Seattle moment? I believe so. Besides fashion what do you think some of the other major changes in film have been? Films are now being… dumbed down, I guess you could say. Production companies are more focused on appealing to a target audience - breaking the box office, instead of making every audience appeal to them. I would love to see more films with pure dialogue and with more meaningful messages. Movies that inspire change. And not just any change, but change for the betterment of everyone. So do you think that Fashion and Film have a future together? I think that Fashion and Film will always have a future together. You can’t have a movie from a certain decade/era without showcasing the fashion as well. However, I do believe that when directors 30 years from now choose our era to have costume designs from; they won’t have much to select from. There aren’t any notable fashions from the 2000’s that I think are timeless. That’s the biggest disappointment. But at least we still have the beautiful, classy designs of Harlem Nights, The Great Gatsby, Titanic and even Shakespeare in Love to hold on to. Well there you have it a folks – from the mouth of our Editor at Large, Kim Wilcott Harris – the relationship between Film and Fashion is, and will always be because it was. Follow us @soulandsalsa on Facebook and Instagram and tell us what you think about the future of Fashion and Film. Do you think they have a future?
CategoryFILM Past Issues
TagsDIFF fashion film film festival kim wilcott harris love stories nzuri za austin uta. kimie simone show