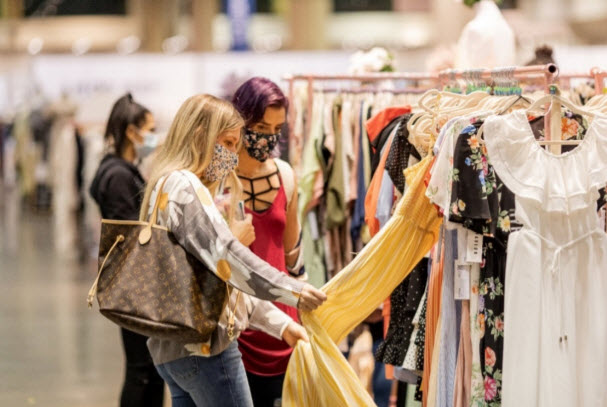 MAGIC during the Pandemic

Las Vegas is becoming the destination for Trade Shows and Conventions. With the ever growing Magic Fashion and Trade Show (more commonly referred to as MAGIC), "Sin City" is  rapidly becoming the trade show capital of the world. Industry types from Milan to Los Angeles anticipate the three day semi-annual convention that has expanded from its usual Las Vegas Convention Center home (LVCC) to now include the Mandalay Bay Convention Center (MBCC) that  showcases the latest in urban fashion to hit the runway every February and August. Shoes and women's apparel occupy the LVCC, while menswear takes up residency at the MBCC, both attracting media attention as well as the fashion curious.

Laura Carroll, with the Review Journal, states that white carpet runs through the venues that adds an atmosphere of excitement - as if something extraordinary is about to happen.

MAGIC is the largest global convention for contemporary women's and men's apparel (as well as for juniors and children) and the most comprehensive destination to shop portfolios to expertly curated shows across every category and fashion trend.

Attracting over 800,000 people, MAGIC brings together designers and retailers for meaningful and intellectual exchanges (via seminars) that are essential in the fashion industry. Emerging brands get the opportunity to introduce their merchandise to major industry players including department store buyers, while also contributing 100.6 million dollars  of nongaming revenue to the city, according to the Las Vegas Convention and Visitors Authority.

Those in attendance in the past have witnessed a growth of 10 events as MAGIC 2015 continues to flourish. For example, shows like FN Platform draw huge numbers and connect over 1,600 big name outlets/retailers with designers at one centralized location. Steve Maker, national sales manager for Eastland Shoe Corporation adds, "FN Platform is a vibrant show allowing us to service our largest chains to the smallest independent stores. Our brands are strategically placed within our category which make it easy for our customers to shop."

Other shows such as WWD, MAGIC Men's, Project Las Vegas, Sourcing, and the Pool Trade Show, among five others, also connect designers and retailers with unique products and opportunities, like  Alumination which features a line of eco-friendly jewelry made of hypo-allergenic, salt water safe, and affordable  aluminium pieces crafted by a mother and daughter team from Arkansas and Tennessee.

Will Magic be virtual or in person this year?