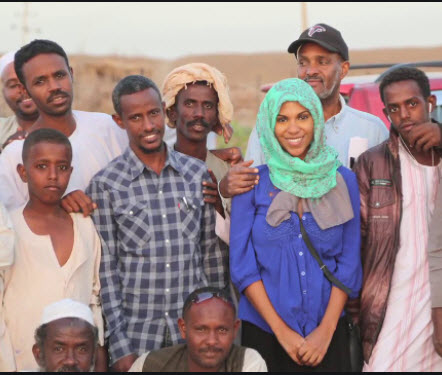 Changing Lives: The Not so-Forgotten of Eritrea

Sabrina Aman is a woman whose drive and determination initially led her to pursue a career in acting. Her multi-ethnic look has been an asset when it comes to acting.  However, she is also a humanitarian. Born in Virginia to Eritrean parents, and raised in Qatar, Sabrina grew up speaking multiple languages – a result of being a product of three different countries and cultures. Her creativity, coupled with her love of the visual arts, quickly got the attention those around her.  In her youth, she traveled to Eritrea numerous times and witnessed its beauty first hand.  She also became aware of some its disparities. Sabrina is also an entrepreneur that knows a thing or two about overcoming life’s obstacles while also mentoring, and encouraging fellow Eritreans.  After graduating from George Mason University, she worked at The World Bank finding innovative ways to reduce poverty in developing countries. There, she became aware of the small group of Eritreans involved in the media industry. She wanted a career that would allow her to inspire others as well as educate. That is when acting and filmmaking took on a whole new meaning. Sabrina began to focus on human rights issues to break the cycle of despair. That is the premise of her documentary The Forgotten.

It was in 2011 after I realized I needed a strong platform for my voice to be heard on this issues facing poverty around the world.

Who are your role models?

Besides my parents, Gandhi, Mother Teresa and Angelina Jolie – Angelina Jolie is exactly what I’ve dreamt of being all my life. She’s a beautiful wife and mother of 6 children – three are adopted, but more importantly, she has a strong commitment to humanitarian efforts.

When did you realize that you were a humanitarian?

In 2013, when over 300 Eritrean and Somalian refugees (men, women and children) died on a boat that capsized just half a mile off the island of Lampedusa.

If you could change the world; what would you do to change it?

I would change the education system.  I feel every child has the right to an education.  Also, I would create better educational opportunities for women across the globe. That and equal right for every man, woman, and child.

What motivated you to travel abroad to Africa?

I was motivated by the increase of refugees fleeing Eritrea. According to the U.N. five thousand Eritrean refugees flee the country every month. During the migration, there is a very dangerous smuggling process that results in rape, torture, the harvesting of organs, and ransom. In 2013, I met two refugees who shared with me their horrific stories of migrating to the U.S. – seeing the bruises on their bodies changed my life. I spent so much time with the children. I love children so much so I had conversations with them, played with them, and even rode donkeys with them (per their request). I then asked many of them if they would like to come with me to America. They all said no because they were happy there.  I learned that happiness comes from contentment.  That is what inspired to make the documentary.

What did you learn on your journey when making the film The Forgotten?

To be grateful for how fortunate I am in the United States. To appreciate everything I have – everything as simple as clean water. Also, to stop complaining over things that we take for granted, because others are not as fortunate.

What do you want the audience to take away from The Forgotten?

That these refugees aren’t standing idly by waiting for death. They fight hard every day to make ends meet. They are very strong and they only seek people to help them become self-reliant. Everyone watching the film is capable of contributing. It takes so little yet it would change so many children’s lives.  Contributions can be monetary or by sending them clothes and educational books and tools.

How can we help?

Contact ARAHA.org and get involved in their many amazing humanitarian efforts. They are one of the best non-profits out there known for their tremendous work in East African countries.