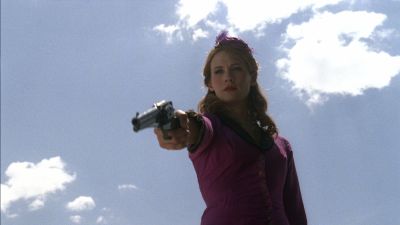 It could be argued that Quentin Tarantino has redefined the Western movie genre earlier this year with the film Django Unchained.  So, it seems fitting that Hollywood would take notice and respond accordingly.  Director Logan Miller, along with screenwriter and twin brother Noah, takes up the baton to the genre with the violent yet surprisingly funny Sweetwater – presented by the 2013 Dallas International Film Festival at the Angelika in Dallas.

January Jones plays Sarah, a former prostitute turned newlywed housewife who seeks revenge on a land grabbing, unholy and unorthodox community preacher (played with skilled accuracy by Jason Isaac) for the ruthless murder of her Miguel (Eduardo Noriega).  The uncharacteristically strong and serene Sarah really knows her way around a gun.
Also starring Ed Harris, which finds the Academy Award winning actor for HBO’s Game Changer, reuniting with the Miller brothers after 2010’s Touching Home.  Harris plays a curiously eccentric, new sheriff-in-town who has come to investigate the growing number of dead bodies piling up on the Western horizon.
At times, Sweetwater seems to be a pro-feminist piece, anti-racist, and appears to be a mocking indictment on religious fanaticism and the idea of Manifest Destiny. A must see for fans of January Jones.  Rounding out the cast are Stephen Root, and country singer Jason Aldean.  (95 mins).