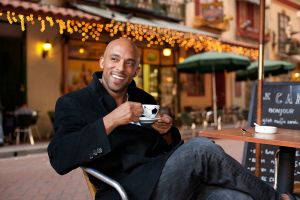 The Power of Ambition: David Bianchi 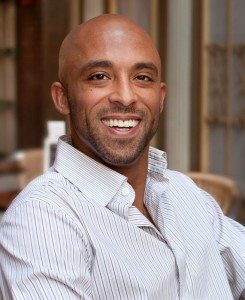 David Bianchi is one artist with a lot on his plate. The Rochester, New York born actor now makes his home in Hollywood. The acting bug bit Bianchi early on in grade school, and from the look of things, he shows no sign of giving up until he has reached full success. The Brazilian/Italian actor is fluent in three languages (English, Portuguese, and Spanish), and has a conversational understanding of French and Italian. The globetrotting artist is also an acclaimed Spoken Word poet, painter, and screenwriter. The sky seems to be the limit for this young entrepreneur, who recently formed his own production company, Exertion Films to further his ambitions. Bianchi recently sat down with Soul and Salsa for a candid discussion on his future.

Soul and Salsa: You are an actor, producer, writer, and visual artist. With so many talents, who are some of your mentors?

David Bianchi: My mentors are those who practice spirituality, positivity, self-betterment, and growth. Mentors, in my opinion, are invisible, and are often hidden in the fabric of my life. I can find them only if I’m in the right state of mind. I strive to surround myself with like minds. However, my greatest mentor is God, who teaches me love, humility, patience, and a general understanding of my place in this vast arena called humanity.

Soul and Salsa: How old were you when you knew you wanted to be an actor, and tell us about that moment?

David Bianchi: The first time I remember I was around seven or eight years old, and a group of kids from the neighborhood would act out TV commercials. The other kids sat on the swing sets as we made up scenes. This was my first stab at improvisation, before I knew what improv was. My first real role, I was cast as Captain Hook in a production of Peter Pan in the third grade. I remained active in theater throughout junior high and high school, as well as in community college. In 2001, I a small improv troupe called Life Works Theater really made me want to do this for life (when I was 24). I was accepted at Arizona State University, where I graduated Magna Cum Laude with a BFA in Theater and Film. Performance has always been a part of my persona for as long as I can remember.

Soul and Salsa: Was there a particular teacher from your formative years who really inspired or challenged you?

David Bianchi: There have been several that have shaped me in different ways. As an adult, I realize those who inspired most were very enthusiastic and brought great energy to class. Ironically, the teachers who told me I wouldn’t succeed still motivate me today.

Soul and Salsa: Do you think it is harder for someone who hasn’t been trained to break into the entertainment business?

David Bianchi: Hollywood is an industry where there is not a direct career track. For example, you may begin a career in business after an MBA, then apply for a job where you may earn a starting wage of $50,000 or more, a year. In show business, however, there is no clear methodology. Either you make it or you don’t, (and wait tables while you try). Some folks come to LA with no background in acting and land a series regular and learn on the set. Others come with BFAs and tons of classical training, beat the streets for 10 years, and never get a “big break.” The vast majority of casting decisions are based on the opinions and perceptions of casting directors and producers. Initially, a background in acting is beneficial but for long term success it’s essential.

Soul and Salsa: How did growing up in New York help to cultivate your creativity?

David Bianchi: I was raised in upstate New York, as well as in México City and Brazil. I am Brazilian and Italian with dual citizenship (US/Brazil). New York helped develop my urban artistry, but my global experiences have added depth to my creativity. I grew up in a global culture that most Americans don’t ever get to experience, and this has made me the artist I am overall, (beyond acting). As a screenwriter, poet, and painter, my influences are very board and diverse.

Soul and Salsa: If you can name one television show, or movie, about New York that truly depicts the city, which one would it be?

David Bianchi: The independent film New York I Love You. It’s a 2009 anthologyof eleven shorts that take on the subject of love in the five boroughs of New York City, starring, Shia LeBeouf, Natalie Portman, Andy Garcia and Orlando Bloom among others, great film.

Soul and Salsa: What is the biggest difference you have noticed between New York and Los Angeles, and did those differences influence your decision to move to the West Coast?

David Bianchi: New York is more of a stage city. Artist’s there dedicate their lives to the theater with an extraordinary intensity. It’s a city of deep expression. New York is a pedestrian community where you have to mix with people in a very up close and personal way. This constant personal contact helps to shape what west coasters call the “New York attitude.” In sharp contrast, LA folk aremore concerned with making impressions and impressing people. It’s a vehicular city, with much less personal contact and I think it takes a toll on personal connectivity there. LA is film and television, rather than stage. Therefore, my decision to study at Arizona State was a strategic move. It was my way of building a bridge to Los Angeles. I knew that I wanted to work in television and film.

Soul and Salsa: You recently started your own film production company, Exertion Films. What motivated you to make such a big move?

David Bianchi: I officially launched Exertion Films in 2010. We are still a very young company that works with limited budgets per picture.Thus far projects under a million with solid cinematic taste.Once you start producing features and selling properties, an entity is essential for tax purposes. And it also helps to establish a brand.

Soul and Salsa: Tell us about Subtlety : Audacity. What is its mission?

David Bianchi: Subtlety : Audacity is an artist collaborative movement that is focused on creating spaces for artistic expression that features diverse artistic events all under one roof. These mixed media events incorporate: Spoken Word, hip hop, short and experimental films, dance, photography, live music, as well as live art installations. The goal is to re-shape how people perceive and interpret the gallery experience by making it truly art interactive.

Soul and Salsa: How does it feel to be recognized by the Imagen Award*?

David Bianchi: It’s amazing to be recognized for all the hard work we put in to ‘Our Vows‘. I wrote, produced and starred in the film and It’s a tremendous honor to be recognized at such a high level.

Soul and Salsa: If you were given the green light for a multimillion dollar budget feature film, who would be in your dream cast?

David Bianchi: There is a pool of actors I would be honored to work with, based on their body of work. However, as far as a dream cast is concerned, it boils down to who is the best choice for each particular project.

David Bianchi: I just wrapped the feature ‘Snap’ co-directed by Youssef Delara and Victor Teran, starring Nikki Reed, Scott Bakula, and Jake Hoffman. Next, I’ll be in Philadelphia shooting with director Tommy Oliver in ‘1982’ with Hill Harper, Ruby Dee, Wayne Brady, Bokeem Woodbine and later on in August, you can catch me in the Sundance 2012 selected film ‘Filly Brown‘ in theatres (also directed by Delara, co-directed by Michael Olmos) starring Gina Rodríguez, Edward James Olmos and Lou Diamond Phillips. Finally, ‘Silver Case’ will be released theatrically in Italy (soon in the US), starring Eric Roberts, Seymour Cassel, and Shalim Ortiz.

You can follow David Bianchi’s new films and endeavors at www.davebianchi.com

*(The Imagen Award is administered by the Imagen Foundation, an organization dedicated to encouraging and recognizing the positive portrayals of Latinos in the entertainment industry).

Camille Woods knows how to Dazzle with DazzlMe!