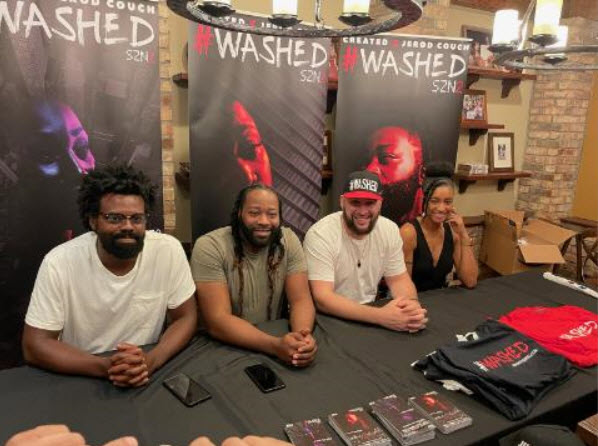 #Washed is going for the Gold. The Amazon original series has been nominated for an Emmy! The show features a splendid bouquet of black talent, including the lovely Jaquai Wade Pearson, who steals the scene with her comedic timing, and two-time Emmy-winning director (and creator) Jerod Couch. The Dallas-based show takes a realistic approach to the Black millennial experience, showing the struggles of 30 somethings as the arrival of the big 3-0 makes them wonder, “Am I happy with life and the way things are going?” Do I want to settle here?” This quest for self-actualization results in panicked, brash decisions for some (I’m looking at you, Mark!) and tough life-changing decisions for many (I can’t believe Mya said no!).

However, each of these characters has one common goal: to achieve their version of happiness. Whether that lies in money, love, power, or respect, they’re all chasing dreams.

But the reality is, we can’t have it all. #Washed asks the question: what are you willing to sacrifice to achieve happiness?

To celebrate its nomination (for Outstanding Art Direction/Set Decoration/Scenic Design for a Drama or Daytime Fiction Program), here’s a sneak peek of what to expect in season 2.

#Washed follows an ensemble of millennials in the metropolis of Dallas, Texas. We begin with the newly single Mya (played by the radiant Nadirah Shakir), who’s seemingly enjoying her best life until it’s made clear that her recent breakup has left her scorned. When her friends (played by the lovely Jacquai Wade Pearson and Yvonne Williams) attempts to get her back into dating fails, Mya is left defeated. Meanwhile, Amber gets caught in Mya’s crosshairs. After sharing the news about a dream job opportunity at a local comedy club, Mya proposes that Amber may be “too old to be chasing dreams.” Can Amber achieve her goal and become the next big comedienne out of Dallas, or will she settle and continue to live a life unfulfilled?

Eric (played by the remarkable Byron Hardy) is caught in the mix of street life and finds himself getting deeper into the game. He links up with Smoke, an O.G on a quest to be the “Tony Montana of Dallas” (played by the talented Dennis Raveneau). Smoke will stop at nothing to get to the top, and Eric quickly learns that it’s every man for himself in the streets of Dallas. How far can he go before he inevitably falls victim to the consequences of street life? At the same time, his childhood friend Mark (played by the gorgeous Corey) has hit rock bottom; after quitting his job and losing the love of his life, we find him restless, without direction, and crashing at his parent’s house. Just when it seems like things couldn’t get any worse for our protagonist, his parents kick him out, leaving him homeless. Mark is down, but he may not be out. He’s been working on a plan that he claims is a real “game-changer.” Will Mark stay stuck in this self-conflicted funk, or will he find a way to make it past his struggles?

The value of this series comes from its representation. It doesn’t attempt to dilute its tale (or lingo). It gives you the unfiltered approach to the Black experience in Dallas and what that looks like on all ends of the spectrum: the streets, the careerman and woman, the dream chasers, and the whole nine. In a perfect world, the show would end on a high note, with all of these characters achieving their dreams decidedly so. But if great tv has taught us anything, it’s that the best endings are never happy. They teach us lessons instead.

I look forward to what I’ll learn from #Washed.

The #DaytimeEmmys will air on CBS on June 25. Be sure to mark your calendars, fans! In the meantime, you can catch seasons 1 and 2 of #Washed right now on Amazon.

Gen Z on Keeping up with the Kardashians
Rent the Runway