Director Teddy Cool takes on the formidable task of capturing over 30 years of Dallas hip hop culture in the 90 minute documentary WE FROM DALLAS. The film celebrates the spirit and drive of a local grassroots movement, with a vibrant energy and collective enthusiasm usually reserved for hip hop artists on the East and/or West coast(s). The filmed played to a full house for two nights at the 2014 Dallas International Film Festival’s Angelika Theater. 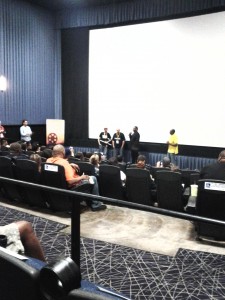 Going as far back as 1983 when DJ Ushay introduced live radio mixing to the area, former and current MCs/rappers, DJs, graffiti artists, break dancers, promoters, etc., and those who love them, got to witness history in the making.  The vibe in the theater was akin to a live concert with audience members cheering when their favorite artists appeared on the screen. Typical theater etiquette of silencing cell phones was waved by co-executive producer King Hollis, who encouraged the audience to use social media to informs others about the film in real time. The D.O.C., Play N Skillz, and Vanilla Ice, KNON DJs EZ Eddie G (who still has the longest hip hop radio show in the country),and Nippy Jones received the lion’s share of the applause,as well as: Dish Nation/97.9 The Beat’s Headkrack, hip hop pioneers Pikahsso (formerly of PPT), Rikki Rincon, Kottonmouth, Suga, George Lopez, Cold Cris, Rob Free, and Apple (a very young Erykah Badu). If you were part of the early Dallas hip hop scene, or you are currently, WE FROM DALLAS is an important film to see.