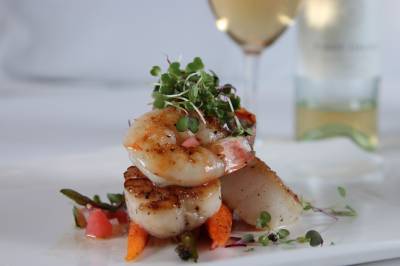 Chef Ken Patrick has accomplished more than he’s ever imagined. As a young boy growing up in Beaumont, Texas, 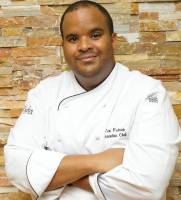 he always new he wanted to learn how to cook. The love of food was instilled in him by his parents and other family members who enjoyed cooking great food. It didn’t take Ken long to get caught up in his passion and to share his art with the rest of the world.

While most of his friends spent most of their days playing outside, Ken was inside usually drawing pictures and painting with watercolors. He has always been an artist & decided at the age of 16 when he took a job at a local barbecue restaurant that he wanted to become a chef. Ken eventually took his art from the canvas to the plate as he began to pursue his true passion, cooking. His love for art inspired him to be creative and gave him an understanding of how important food presentation was to the human eye. As he continued to hone his culinary craft, the beauty of his dishes became more apparent & appealing to him & his guests.

Chef Ken became very familiar with the ingredients from his Southern/Creole roots which eventually influenced his cooking style. After serving six years in the U.S. Army, and traveling, he returned to Texas to continue perfecting his craft. He eventually became knowledgeable of Southwestern flavors and has since incorporated these clean, bold flavors into his cuisine.

While Chef Ken never attended culinary school, therefore he knows that his talent is truly a gift from God. He constantly credits his Mother for his drive and inspiration. She is where it all started for him. Ken comes from a family of three brothers and one sister, whose continued support motivates him to achieve his goals.

Chef Ken has become a very positive influence to his community and hometown. He’s appeared on numerous TV productions and he speaks constantly at public schools to students about making positive life choices. Ken has received national recognition from the White House and is an ambassador of Michelle Obama’s Let’s Move! Campaign & Chefs Move to Schools Program, where he educates school leaders, students & their parents on the importance of implementing healthy eating choices for their children. Children are very close to Ken’s heart as he now has a son, Ken Jr., who is his pride and joy.

Chef Ken is the proprietor of the Ken Patrick Culinary Group, FOOD LIFE with Chef Ken! & Texas Catering Company. He is also the founder of the non-profit organization, F.O.O.D-Feeding Our Own Disadvantaged, where he focuses on providing meal assistance to local families in their time of need.

Make Your Place an Intimate Place